These days, the bad news comes at us so quickly, there’s barely time for it to register. So at least let us pause and give some of the more absurd items the attention they so richly deserve.

In Libya, those who have been waging war against Gaddafi have splintered into opposing factions and have taken to killing each other. From my vantage point, that’s a good thing. As I said from the very beginning, anyone who believed the uprisings throughout the Arab and Muslim world were cause for celebration had a few screws loose. The only celebrating should be taking place in Tehran. The Arab spring isn’t an oasis, but merely a toxic mirage.

I keep wondering if Obama is discounting his plummeting approval numbers as a right-wing conspiracy. After all, every time he gives a speech to his big money contributors, college students, union workers at taxpayer-funded windmill factories or the NAACP, he gets standing ovations. You can see where a guy living in such a bubble could be blindsided by reality. His partner in crime, Joe Biden, has his own troubles. I mean apart from his stupidity and the bad hair transplant. First, he chimes in to agree with Senator Mike Doyle’s assessment of Tea Party congressmen as terrorists, but then, for good measure, we discover that he’s charging the Secret Service $2,200-a-month to rent a cabin on his estate. Inasmuch as it’s the taxpayers footing the bill to pay those guys to protect his worthless hide, I think landlord Biden should forego the $26,000-a-year. If he can’t get by on the $221,100 we’re paying him, perhaps it’s time he retire and start collecting his various over-inflated pensions.

Speaking of retirement, serial sex offender Mike Wu (above right) has followed Rep. Anthony Weiner back into civilian life. The question is why censure or resignation seem to be the only options when our so-called public servants are found guilty of criminal offenses. These two freaks got to resign while Barney Frank and Charley Rangel continue to pile up seniority, whereas people who don’t have “Congressman” in front of their names would have gone to jail for pandering and tax evasion, respectively.

It used to be that one of the major attractions of the Oval Office, at least so far as Jack Kennedy and Bill Clinton were concerned, was that it was a great way to meet chicks. But these days even mere congressmen are cashing in on that tacky perk. Which doesn’t say much for our politicians, but it says even less for our young women.

Even though ex-NY congressman Chris Lee, who went online trolling for sex, was a Republican, by and large it’s liberals who can’t seem to keep their mouths or their pants zipped up. It’s no wonder that liberals are forever promoting abortion. They have a vested interest. It also helps explain why they become so personally outraged whenever people try to introduce character, morals and personal values into the political discourse. 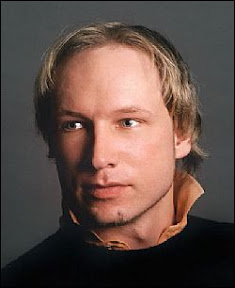 Finally, for murdering 76 of his fellow Norwegians, apparently the worst that Anders Breivik (right) can expect is a sentence of 21 years, which works out to about four months-per-murder. I guess he’s lucky they can’t add jaywalking or double-parking to his list of crimes or he might be facing some really severe Norwegian justice.

Just for the record, I think it should be noted that the campers who were massacred on the island of Utoya were not just a bunch of innocent kids on holiday. Under the auspices of Norway’s Labor Party, they were showing their support of the Palestinians. As part of camp activities, the young folks were engaging in anti-Israel rallies and competing in mock flotilla boat races dedicated to breaking Israel’s blockade of Gaza. I’m not saying the young people deserved to be shot down; I am saying they weren’t Boy Scouts and Brownies.

As for Breivik, who could easily take first place in a Julian Assange look-alike contest, if found guilty, he would likely wind up in Halden Prison. This particular lock-up is spread out over 75 wooded acres, with jogging trails; private rooms with baths; refrigerators; large-screen TVs; a state of the art gym, complete with a climbing wall and personal trainers; not to mention a recording studio that is used to encourage the inmates to form bands.

Although Breivik has pled not guilty to the murderous rampage, tens of thousands of his countrymen have stepped forward to confess.

Leaving Afghanistan is a Mistake